Department of Engineering and Architecture 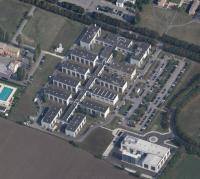 Route: Take one of the following buses (ticket fare 1,20 EUR):

Parma can be reached by car, by train or by air.

From the "Giuseppe Verdi" airport, only 5 km away from the heart of the city, the historical centre can be easily reached by taxi, rental cars or by bus n. 6. Unfortunately, only very few flights reach Parma directly. More likely landing airports are Milan "Malpensa", Milan "Linate", Milan "Orio al Serio" (located in Bergamo, hub for many low-cost airlines) and Bologna "G. Marconi" (advised). All these airports provide shuttle bus services to the corresponding central stations in Milan or Bologna (5 to 7 Euros), running until around 11 pm. Tickets are sold on board.

Train connections to Parma from "Bologna Centrale" and "Milano Centrale" are very frequent and run from the very early morning to around 11 pm. Travel times are from 45 minutes (Trenitalia Frecciabianca trains) to 70 minutes (very cheap regional trains) to/from Bologna and from 55 to 80 minutes to/from Milan. Tickets can be bought at vending machines or ticket booths inside the stations or even at tobacconists or newspaper kiosks (regional trains). Train time-tables can be found at this link (regional and high-speed connections by Trenitalia) or at this link (high-speed connections by NTV). High-speed trains (Trenitalia Frecciarossa or Frecciargento, NTV Italo) reach Bologna Centrale station or Reggio Emilia Mediopadana station. Bologna Centrale can be reached from Rome in little more than 2 hours and from Florence in 35 minutes, Reggio Emilia in 2.5 hours from Rome and 70 minutes from Florence. From Reggio Emilia Mediopadana high-speed train station, Parma can be reached by the Italobus service (included in the train price if you have traveled by NTV Italo high-speed train). Be aware that no direct train connections exist between Reggio Emilia Mediopadana station and Parma station. Parma railway station is in the northern side of the city, 10 minutes' walk from the city center and at walking distance (up to 15 minutes) to most hotels.

Parma is located along the motorway A1 Milan-Bologna and along the A15 Parma-La Spezia. Parma has two motorway exits:

Located at the access points of the town there are the exchange car parks, free and open 24 hours a day. You can leave your car there and reach the city center by shuttle buses. Indoor toll parking is available closer to the center of town, as well as outdoor parking along the city streets marked by blue lines: toll parking in the mornings and afternoons using park meters, free around lunchtime and at night. Prices may vary depending on the location.

You can take a taxi (at the train station or calling number + 39 0521 252562) or drive your own car according to the following directions:

The city's central location within Italy makes it easy to reach the sea, the Alps or the most famous Italian art cities from Parma, thanks to excellent motorway and railway connections. Rome, Florence, and Venice are about 3h, 1.5h, and 2.5h away from Parma by high- speed train, or about 4.5 h, 2h, 3h by car, respectively.